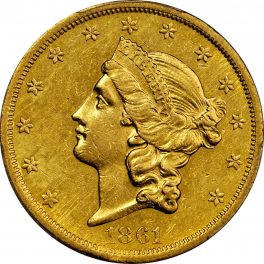 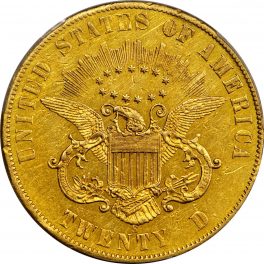 
The 1861-S Paquet $20 double eagle is the rarest of all San Francisco Mint coins of this denomination. This is a popular coin, both for its back story and as the only readily collectible sample of the Paquet Reverse. Fewer than 200 coins are available for today’s collectors, and all of those have been subject to some degree of circulation. The population is heavily distributed throughout the VF and EF grades, with many pieces plagued by harsh cleaning and other damage. Just 25 to 35 examples can be found in About Uncirculated condition, with about 10 Choice AUs to represent the pinnacle of the issue.
Type 1A: Modified Reverse, the 1861 Paquet Reverse Double Eagles
From 1850 onward Philadelphia and branch mints had problems with the excessive cracking of double eagle reverse dies and produced many extra dies to address this issue. For instance, 13 new obverse dies were made and 33 reverse dies were made for coinage at the Philadelphia Mint in 1851. The next year nearly twice as many reverse dies were made than obverse dies. The task of revising the reverse design was undertaken by Anthony C. Paquet starting with pattern coins in 1859.
His design used for regular coinage in 1861 featured the reverse border inscription, UNITED STATES OF AMERICA above and TWENTY D. below. The letters were arranged more compactly providing for a generous space between the two groups of words. Coinage of double eagles with the new Paquet design commenced at the Philadelphia Mint in January 1861.However, due to a problem with the die, production was halted by Mint Director James Ross Snowden, who dispatched a note to the San Francisco Mint to stop production with the new die as well. Only two Philadelphia Mint coins exist today. By the time the San Francisco Mint received his note, a number of double eagles had already been struck and issued.