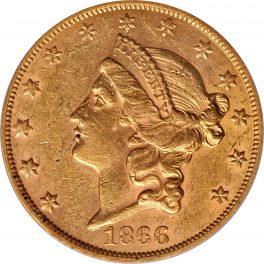 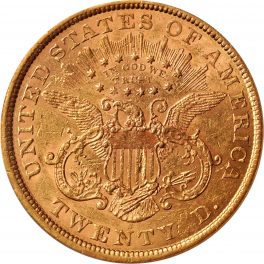 The 1866-S Motto double eagle begins a trend of softly struck issues that continues for much of the Type 2 Liberty Head double eagle series. Detail on Libertys hair bun, the curls along the brow and the high points of the coronet is often incomplete, as are the finer elements of the shield and the inside of the eagles wings on the reverse. As with all early San Francisco Mint double eagle issues except for those 1866 and earlier and recovered from shipwrecks, the 1866-S Motto is typically encountered with heavily abraded surfaces. Luster is also below average for the issue and, when present at all, is usually subdued and grainy with minimal frost. A transitional issue in the Liberty Head double eagle series, the 1866-S Motto was produced beginning in March of that year after the San Francisco Mint struck a limited number of 1866-S No Motto coins. The 1866-S Motto is relatively obtainable in circulated grades through EF with AU coins scarce and Mint State survivors very rare. The Saddle Ridge Hoard, discovered in Northern California in 2013, contained a small number of high grade examples of this issue, although most were impaired due to cleaning. One of the Saddle Ridge examples, however, was subsequently graded MS-62+ by PCGS and now ranks as the finest known 1866-S Motto double eagle.