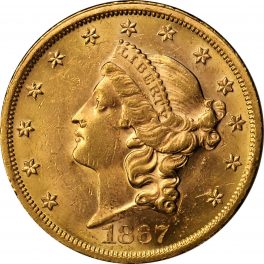 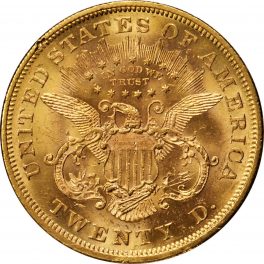 The 1867 double eagle rivals the 1866 as the best struck Liberty Head double eagle of the Type 2 design. Most examples are sharply defined throughout, a few exceptions showing trivial softness of strike to the central high points on the obverse. Heavily abraded surfaces are the norm, but in high grades the 1867 is known for superior luster that is often vibrant satin to softly frosted. This is a readily obtainable issue in all circulated grades and, with a fair number of low end Mint State coins known, the 1867 is the most plentiful Type 2 Liberty Head double eagle from the 1860s in high grades. This is the earliest issue of the denomination that appears to have been widely represented in overseas hoards of United States gold coins. A phenomenal NGC MS-66 example is known, but the 1867 remains rare in grades above MS-62. The Proof 1867 is also rare with fewer than 15 coins believed extant in all grades. Many of the 50 Proofs struck likely remained unsold at the time and were subsequently lost to future generations of collectors.