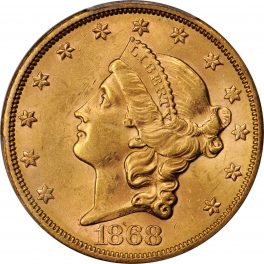 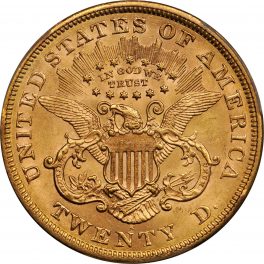 In keeping with its status as a San Francisco Mint double eagle from the late 1860s, the 1868-S double eagle is characterized by softness of strike that affects not only the central high points on both sides, but also the stars and border around the periphery of the obverse. Apart from a few uncommonly well produced pieces, this issue is also known for luster that is typically granular with a subdued, minimally frosted texture. Heavily abraded surfaces are the norm for the 1868-S. Although obtainable with relative ease in circulated grades through EF, the 1868-S is scarce in AU and very rare in Mint State. Most Uncirculated survivors grade MS-60 or MS-61, although a single MS-64 is known to NGC.