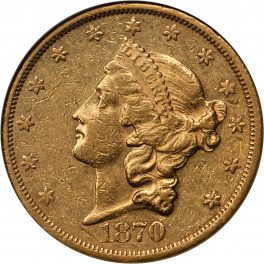 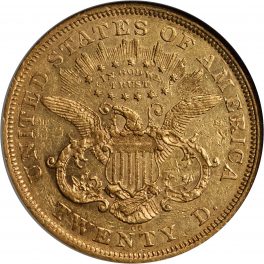 Struck during the earliest days of coinage operations at the Carson City Mint, the 1870-CC double eagle is always seen with more or less softness of strike. The obverse detail is incomplete over Liberty’s hair curls and many of the peripheral stars. The reverse, while generally a bit bolder than the obverse, tends to be slightly weak at and near the borders. All known examples are heavily abraded, and the handful of examples that retain minor traces of original luster are suggestive of a semi-prooflike finish. As the first double eagle from the Carson City Mint, the 1870-CC is one of the most popular United States gold coins. The low mintage of 3,789 pieces, combined with heavy commercial use, explains why it is also a leading rarity in the Liberty Head double eagle series. Fewer than 70 coins are believed to have survived, most of which grade VF. The 1870-CC is particularly rare in EF and AU grades, and it is unconfirmed in Mint State, although one was reported years ago.