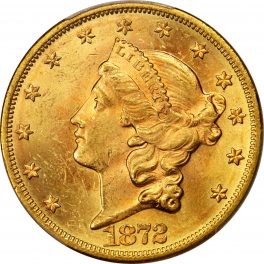 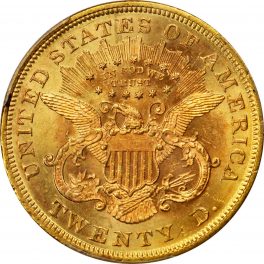 This is a well produced issue that is usually represented by boldly to sharply defined coins. All but a few of the survivors are very heavily abraded with numerous detracting marks. In high grades the 1872 double eagle is vibrantly lustrous with either a frosty or, less often, prooflike finish. Thanks to the repatriation of many examples from overseas holdings beginning in the 1950s, the 1872 is readily obtainable in all circulated grades up to and including AU. Smaller numbers of Mint State coins have also been repatriated over the years, but at that level of preservation the 1872 remains very scarce. The typical Uncirculated survivor grades MS-60 or MS-61, although a few Choice pieces are known, including the PCGS MS-63 from the Gilded Age Collection auctioned by Stack’s Bowers Galleries in August 2014. Proof double eagles of this date are every bit as rare as those from 1871, and no more than a dozen coins are believed to have survived from a mintage of just 30 pieces.