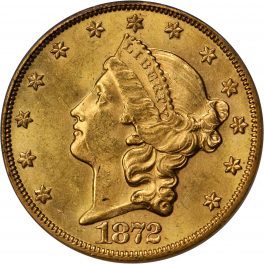 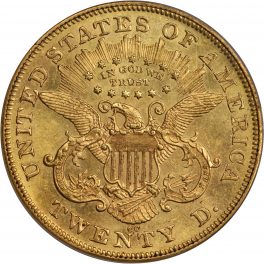 The 1872-CC double eagle is an uncommonly well produced early Carson City Mint double eagle. Most examples display a well balanced, overall bold strike with softness of detail minor and generally confined to the high points of Liberty’s portrait on the obverse and/or the stars in the reverse field above the eagle. Most examples are heavily abraded, as is the norm for early Carson City Mint gold issues, but it is a bit easier to locate a relatively smooth-looking 1872-CC than it is for the 1870-CC and 1871-CC. The few high grade examples that retain original mint luster exhibit a pleasing satin texture. This is the earliest Carson City Mint double eagle that is realistically obtainable for many collectors, but it is still rare in an absolute sense. The typical survivor grades VF or EF with low end AU coins very scarce and Choice AU-55 and AU-58 examples rare. The 1872-CC is very rare and seldom encountered in Mint State. One of the finest known coins is the PCGS MS-62 that Stack’s Bowers Galleries sold in August 2012 as part of the Battle Born Collection of Carson City Mint Coinage.