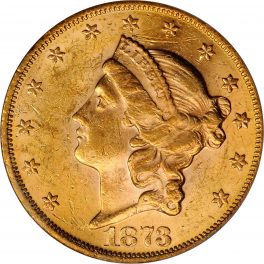 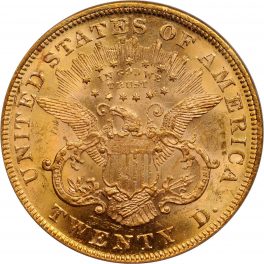 The 1873 Close 3 double eagle is not a well produced double eagle, and most examples are softly defined over Liberty’s hair curls, the obverse stars, and in the center of the reverse. The typical survivor is heavily abraded and worn to the point where none of the original luster remains. For high grade coins the luster tends to be excellent with a thick frosty texture. The mintage for this variety is not recorded, but based on the number of surviving examples it probably accounted for a small percentage of the circulation strike double eagles stuck in the Philadelphia Mint during 1873. The 1873 Close 3 is one of the scarcest Type 2 Liberty Head double eagles and is typically offered in circulated grades such as VF, EF or low end AU. Choice AU examples are very scarce, while Mint State coins are rare and seldom encountered above MS-61. One of the finest known 1873 Close 3 double eagles was discovered as part of the Saddle Ridge Hoard and has since been certified MS-62 by PCGS. All Proof 1873 double eagle were struck with the Close 3 date logotype. Despite having a somewhat lower mintage, this Proof issue is similar in rarity to the Proof 1871 and Proof 1872. Only eight to 12 specimens are believed extant in all grades.