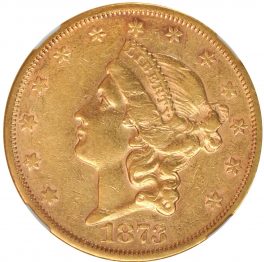 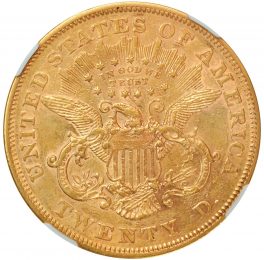 The quality of strike for this issue is similar to that of the 1873-S Close 3 double eagle, the reverse generally sharp but the obverse often a bit soft over many of Liberty’s hair curls and several of the star centrils. Heavily abraded surfaces are also the norm for the 1873-S Open 3. High grade coins are characterized by softly frosted, somewhat granular luster. The Open 3 is the rarer of the two date logotype found on 1873-S double eagles, and by a factor of at least three to one. Even so, enough circulated examples exist that the 1873-S Open is relatively obtainable in grades through AU. This issue is scarce in Mint State and very rare above MS-61. The finest certified examples have been graded MS-62 by PCGS and NGC.