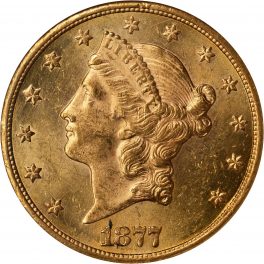 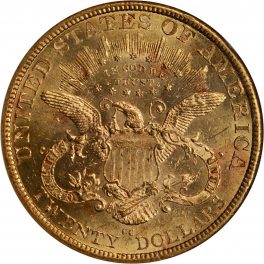 The typical 1877-CC double eagle is sharply struck, moderately to heavily abraded and, in high grades, exhibits strong luster in either a frosty or prooflike finish. Thanks to the dispersal of two significant hoards during the late 20th century, the 1877-CC is more obtainable in circulated grades than its mintage might imply. Indeed, one should have little difficulty locating an example in VF or EF, and even in the lower AU grades this issue can usually be acquired without undue effort. In attractive Choice AU the 1877-CC is scarce, however, while in Mint State it remains rare. The finest known examples have been certified MS-62 by the major grading services, including the PCGS specimen from the Battle Born Collection of Carson City Mint Coinage sold by Stacks Bowers Galleries in August 2012.