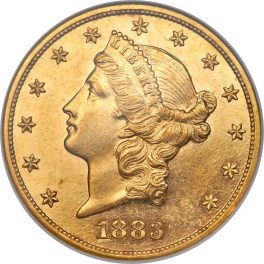 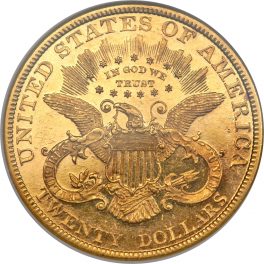 Survivors of this Proof-only issue are fully struck with strong cameo contrast between reflective fields and satin to frosty devices. Many examples exhibit at least a few light hairlines from careless handling over the years, but a few virtually pristine specimens are known. As previously stated, the 1883 double eagle is a Proof-only issue _ one of just three in the regular issue Liberty Head double eagle series. A famous and eagerly sought date, the 1883 is also a major numismatic rarity with only 20 to 25 coins believed extant. It is likely that many of the 92 specimens struck were later melted in the Mint when they failed to sell to contemporary collectors, a common occurrence for many classic Proof gold issues. Finest certified honors belong to an outstanding Proof-66+ Deep Cameo listed at PCGS.