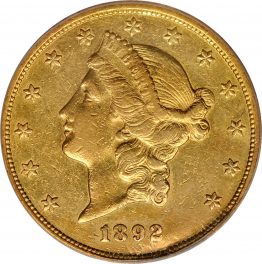 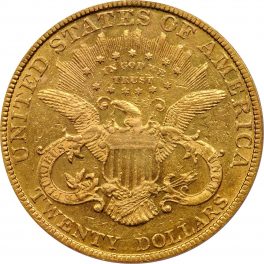 As with many Liberty Head double eagle issues from the 1890s, the 1892 is typically encountered with a sharp strike, moderately to heavily abraded surfaces and, in high grades, excellent luster. As a low mintage issue most Mint State survivors are semi or fully prooflike, although a few satin to frosty pieces are known. This low mintage issue is a key date among Type 3 Liberty Head double eagles, and it is scarce to rare at all levels of preservation. Most survivors grade EF and AU. Those coins are generally from overseas hoards that have been repatriated beginning in the mid to late 20th century. The 1892 is rare in all Mint State grades, although a couple of truly spectacular Superb Gems are known, including an MS-68 certified by NGC. As with all Proof double eagles the 1892 is rare, the survivors in this case numbering fewer than 30 coins.