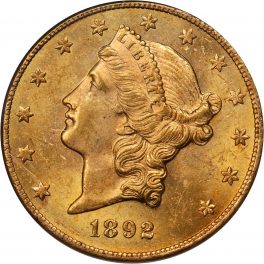 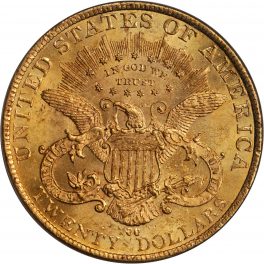 This is a generally well produced issue with most survivors sharply struck and Mint State coins exhibiting pleasing luster in a satin, frosty or, occasionally, semi-prooflike finish. The typical example is moderately to heavily abraded from commercial use. The 1892-CC double eagle is scarce, the second rarest Carson City Mint double eagle from the 1890s, although enough circulated examples remain that locating an EF or AU should not be too difficult. Mint State survivors are scarce through MS-62, most having been repatriated from overseas hoards. Only a handful of examples are known that grade any finer, however, with MS-63 representing the finest certified for the issue at the major third party grading services. One of the PCGS MS-63s appeared as lot 11056 in the Stacks Bowers Galleries August 2012 sale of the Battle Born Collection of Carson City Mint Coinage.