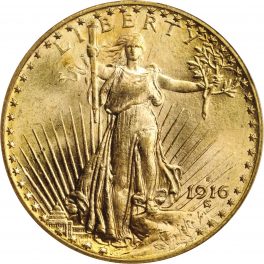 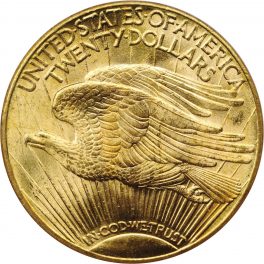 Although the 1916-S St. Gaudens typically comes with bold to sharp striking detail, finding an attractively lustrous example can be a problem since many pieces have a somewhat granular texture and subdued finish. Many of the coins that have been repatriated from foreign sources in recent decades are of relatively high quality, however, so minimally abraded examples are easier to locate for the 1916-S than for most other early date Saint-Gaudens double eagles.
The final pre-1920 Saint-Gaudens double eagle and the only one from this year, the 1916-S is curious from the standpoint of market availability. It is actually fairly scarce despite its generous mintage, and Mint State survivors are rarer than those of the lower mintage 1915-S. On the other hand, many of the coins that have returned to the United States from foreign sources are of Choice to Gem quality, which explains why the 1916-S is readily obtainable in grades through MS-65. It is moderately scarce in premium Gem MS-66, but enough examples have been certified at that level that the persistent buyer should have little difficulty locating one. On the other hand, the 1916-S is virtually unknown any finer with just a handful of Superb Gems in MS-67 listed at NGC. The finest certified at PCGS grade MS-66+.