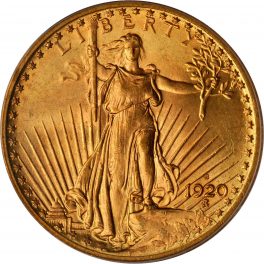 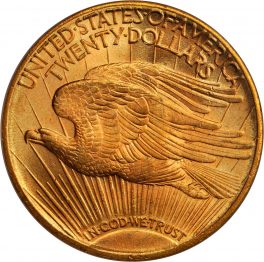 Almost all 1920-S St. Gaudens double eagles extant are softly struck along the lower left obverse border, especially over the Capitol building and the adjacent stars. The strike is generally sharp elsewhere, but luster can be somewhat subdued with truly vibrant examples few and far between. Among the few coins known lightly to moderately abraded surfaces are common.
This Saint-Gaudens double eagle is very rare in all grades. Rather than seeing widespread exportation like many other issues from the 1920s, virtually the entire mintage for the 1920-S remained in storage in government vaults, including as backing for Gold Certificates. When the federal government stopped paying out gold coins in 1933, and then began calling in examples held by the public the following year, the stage was set for the wholesale destruction of millions of Saint-Gaudens double eagles. The 1920-S is one of several issues in this series that suffered a particularly high rate of attrition; most were melted in 1937 alongside countless other double eagles that had either never left government holdings or were returned to Treasury Department control during the recall. Since few were exported, the 1920-S has not had its population increased by the repatriation of coins from foreign banks and other holdings. It is likely that no more than 150 examples have survived, some professional opinions providing an estimate of just 100 or so coins extant. The population is fairly evenly split between circulated coins in the VF to AU range and Mint State pieces, with most of the latter grading no finer than MS-64. Gems are exceedingly rare, one of the finest certified being the PCGS MS-66 from Louis E. Eliasberg United States Gold Coins sold by Bowers and Ruddy in October 1982.