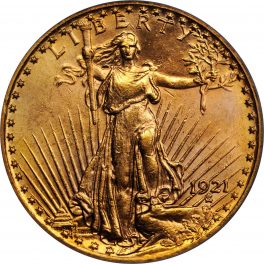 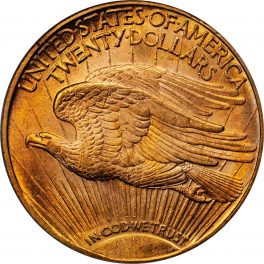 In general the 1921 St. Gaudens double eagle is well struck, although most survivors display a touch of softness to the high points of Libertys portrait and along the lower left obverse border. Luster ranges from satiny to softly frosted, the former examples usually more vibrant in appearance. With only a few exceptions, the surfaces are moderately or heavily abraded.
The story of the 1921 mirrors that of the 1920-S, with virtually the entire mintage remaining in government storage until melted in 1937. Both issues are of comparable rarity in todays market, the extant population of the 1921 on the order of just 100 to 150 coins. Survivors are fairly evenly split between circulated and Mint State grades, most falling into the AU-55 to MS-63 range. The 1921 is rarer than the 1920-S in higher grades with few MS-64s certified and just a handful of Gems known. The finest examples were obtained directly from the Mint in early 1922 by Dr. Thomas Louis Comparette, curator of the Mint Cabinet, at the request of George Seymour Godard, the Connecticut State librarian. Although Godard was officially tasked with updating the numismatic collection of the Connecticut State Library, he appears to have obtained two (or possibly three) 1921 double eagles on his own account through Comparette. One of the former Godard coins appeared in Stacks session of Auction 82 and has since been certified MS-66 by PCGS. A second piece formerly part of this collection eventually found its way into the Eliasberg Collection auctioned in October 1982 by Bowers and Ruddy under the title of The United States Gold Coin Collection. The Eliasberg specimen is now in a PCGS MS-65+ holder. Interestingly, two Specimen 1921 double eagles are known that display a finish similar to that of the Satin Proof double eagles of 1909 and 1910. These coins, however, were not part of a regular U.S. Mint issue and appear to have been struck at the personal request of Raymond T. Baker, who was director of the Mint at that time. The finer of these two special pieces has been certified Specimen-64 by NGC.