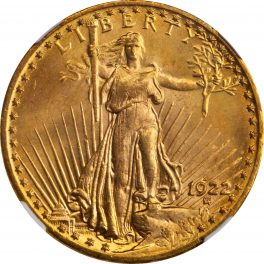 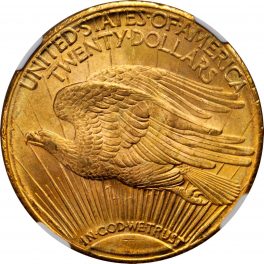 This is one of the more challenging Saint-Gaudens double eagles to locate with a sharp strike as the vast majority exhibit softness of detail around the borders on both sides due to die bulge. The typical Mint State example has above average luster, but is confined to lower grades due to liberally abraded surfaces.
Despite a significantly higher mintage the 1922-S St. Gaudens is far rarer in all grades than the 1922, and it seems likely that much of the mintage remained in government vaults until destroyed in 1937. On the other hand, thousands of coins were exported, and their return to the United States in more recent decades makes this a realistically obtainable double eagle. Most survivors are confined to the MS-60 to MS-63 level, with near-Gems in MS-64 very scarce and anything finer rare. Only a handful of coins have been certified finer than MS-65, the best of which are in PCGS MS-66+ holders.