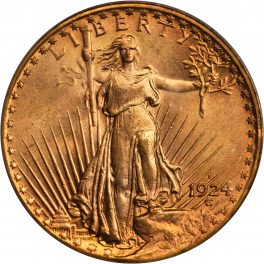 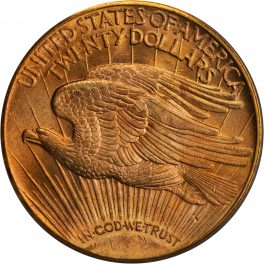 While the typical 1924-D St. Gaudens is sharply struck in and around the centers, many are softly defined at the borders due to die deterioration. Mint frost is strong on these double eagles, although there is a prevalence of moderately to heavily abraded coins among the survivors.
The high mintage of 1924-D double eagles conceals its scarcity in todays market. While several thousand examples were exported, the lions share of the mintage remained in government storage until they were melted during the late 1930s. Only 1,000 or so coins have been repatriated since the 1950s. Most survivors are Mint State, generally confined to the MS-60 to MS-64 grade range. Beginning at MS-65 the 1924-D develops into a significant condition rarity, the finest certified of which have been graded MS-66 by PCGS and NGC. One of the PCGS-certified coins was once part of the Amon G. Carter, Jr. Family Collection auctioned by Stacks in January 1984.