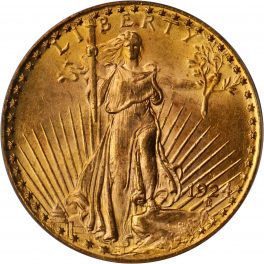 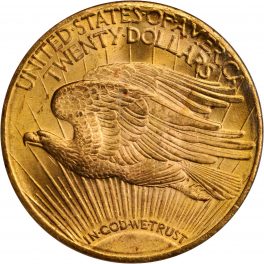 Although the 1924-S St. Gaudens double eagle generally has a bold to sharp strike, a number of examples are a bit lightly struck in isolated peripheral areas due to die deterioration. Survivors are generally lustrous and noticeably abraded.
As with the 1924-D, most coins were retained in federal vaults until the late 1930s, when they went to the melting pot alongside millions of other double eagles. At one time, in fact, the 1924-S was regarded as the rarest Saint-Gaudens double eagle, surpassing even the 1920-S, 1921, 1927-D, and even the 1933. Beginning in the 1950s, however, examples were discovered in European bank holdings and repatriated to the United States. The numbers involved were never large, and the 1924-S remains scarce to rare in all grades. The typical survivor is Uncirculated and grades no finer than MS-64. Gems are very rare, although PCGS has certified a single example in MS-67 that traces its provenance to Ohio coin dealer James Kelly in the 1940s.