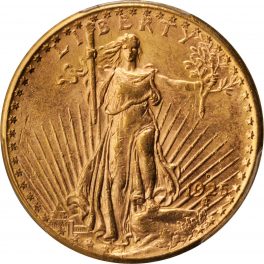 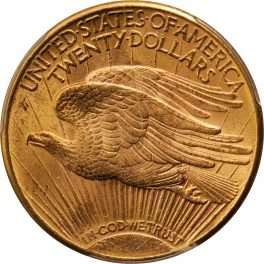 The 1925-D St. Gaudens is generally well struck and the typical Mint State survivor also displays frosty luster of above average to excellent quality.
The 1925-D is one of several mintmarked double eagles from the 1920s that are much rarer than their mintages might imply. As with the 1924-D and 1924-S, much of the 1925-D mintage remained in federal vaults after striking and was melted during the late 1930s. Survivors number fewer than 1,000 coins in all grades, the majority of which were repatriated from French banks beginning in the late 20th century. Most known examples fall into the MS-60 to MS-64 grade range. Gems are rare and no examples have been graded finer than MS-66 at either PCGS or NGC.