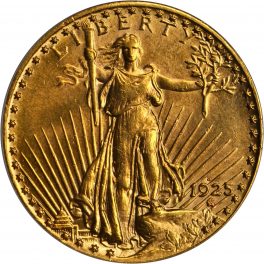 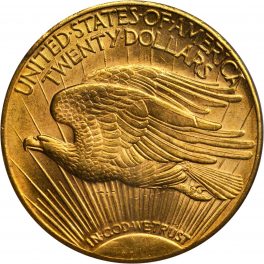 Although generally well struck, most 1925-S St. Gaudens double eagles are a bit softly defined on the obverse at the digit 5 in the date and/or over the central high points of Libertys portrait. Luster is good, with satiny pieces more prevalent than their frosty counterparts.
The 1925-S is another mintmarked double eagle from the Roaring Twenties that saw virtually the entire mintage held by the government until destroyed in the late 1930s after the gold recall. Only a fraction of the mintage was exported, and the few that have been repatriated in recent decades account for most known examples. This is one of the few Saint-Gaudens double eagles that is seen as often in circulated grades as it is in Mint State. Most survivors grade EF, AU or low end Uncirculated (MS-60 to MS-63). In MS-64 the 1925-S is rare, while in higher grades it is virtually unobtainable. Even so, there are a few stellar 1925-S double eagles extant, including the finest certified example in PCGS MS-68.