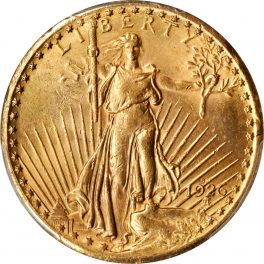 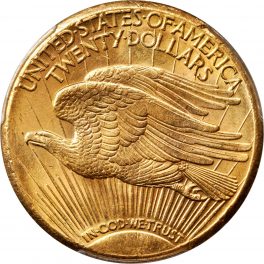 Although most 1926-S St. Gaudens double eagles exhibit a bold strike, some exhibit evidence of die deterioration around the obverse periphery. Luster is strong with most examples displaying a pleasing satin or softly frosted texture. Many examples are noticeably abraded, some quite heavily so.
This is the most frequently encountered mintmarked double eagle of the 1924 to 1927 era. The mintage bears no relation to the availability of coins as most were never released from government vaults and were eventually melted during the late 1930s. Several thousand coins were used in international commerce, the survivors returning to the United States beginning in the 1950s, and these now constitute the vast majority of known examples. The typical survivor falls into the MS-60 to MS-64 grade range and at higher Mint State levels the 1926-S is decidedly rare. NGC reports a single MS-67 as the finest certified. At the top of The PCGS Population Report is the MS-66+ auctioned by Stacks in their January 1984 sale of the Amon G. Carter, Jr. Family Collection.