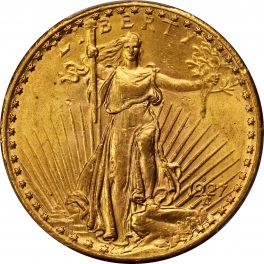 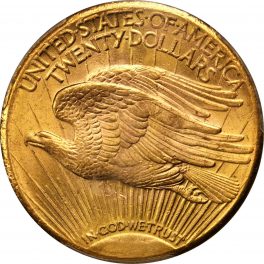 Striking quality varies for the 1927-S St. Gaudens with many examples softly defined along the lower left and/or upper obverse borders. On the other hand, Mint State survivors tend to have excellent luster that is either satiny or softly frosted. Most examples are liberally abraded and locating a relatively smooth coin can be a real challenge.
The 1927-S suffered a high rate of attrition through melting of undistributed examples during the late 1930s. Very few pieces were exported, although individual examples were repatriated from overseas sources beginning in the 1950s. At no time was the 1927-S widely represented in those repatriations, however, and survivors number fewer than 200 coins. Many examples are in high circulated grades such as AU-55 and AU-58, although more plentiful are Mint State pieces in the MS-60 to MS-63 range. There are only a few MS-64 coins certified, while rarer still are Gems in MS-65 and higher grades. PCGS reports a single MS-67 that was once in the collection of the Museum of Connecticut History.