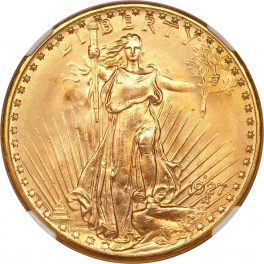 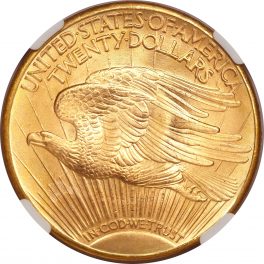 Almost all known examples are sharply struck with rich mint frost. Additionally, most survivors are minimally abraded if not overall smooth.
The 1927-D St. Gaudens is the rarest circulation strike Saint-Gaudens double eagle after only the uncollectible 1933. The mintage of 180,000 pieces is certainly small by the standards of the type, but it is the distribution or, rather, lack thereof that really explains the rarity. The 1927-D was one of several double eagles from the 1920s and early 1930s that were available for face value from the Treasury Department during the summer of 1932. This suggests that, as opposed to being used in international trade, the mintage of the 1927-D was retained in federal vaults. Those pieces were eventually destroyed in 1937 when the government melted vast quantities of gold coins. Fewer than 20 examples have survived and, since most are Mint State, it is likely that these pieces were obtained directly from the Mint or Treasury Department within a few years of striking. Many of the extant examples are high quality and have been certified MS-65 or finer by PCGS and NGC. Highest graded honors go to the single MS-67 listed at PCGS.