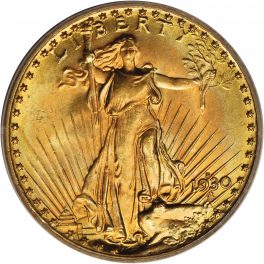 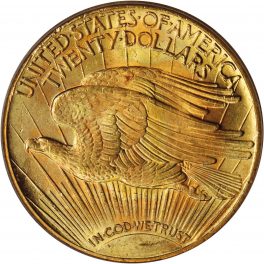 While most 1930-S St. Gaudens double eagles display overall sharp to full definition, closer examination will reveal minor lack of detail along the lower obverse border. The 1930-S is almost always offered with excellent satiny or softly frosted luster. Bagmarks are plentiful and it will be extremely difficult to locate a pristine example.
The 1930-S is a major numismatic rarity, second only to the 1927-D among circulation strike Saint-Gaudens double eagles (discounting the uncollectible 1933). Few examples were used in international commerce, if any. Most 60 to 75 surviving examples were probably obtained directly from the Mint or Treasury Department before the federal government stopped paying out gold coins at face value in April 1933. Examples are fairly evenly distributed throughout the MS-60 to MS-65 grade range, although there are a few stellar pieces that have been certified MS-66 and MS-66+ by the leading third-party grading services. The National Numismatic Collection in the Smithsonian Institution contains a phenomenal 1930-S double eagle with an estimated grade of MS-68.