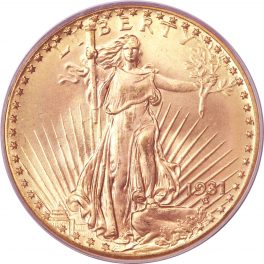 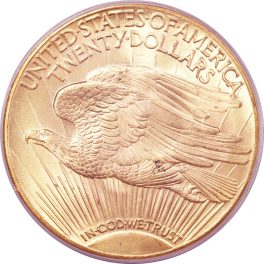 Produced to a high standard of quality, this is an attractive double eagle characterized by sharp striking detail and bountiful mint luster. Surviving examples are fairly evenly distributed between lightly to moderately abraded coins and those that are overall smooth, if not virtually pristine.
One of several double eagles from the late 1920s and 1930s that could still be obtained from the Treasury Department for face value as late as the summer of 1932, the 1931 St. Gaudens does not appear to have been released into circulation to any great extent. Virtually the entire mintage was retained in government vaults in the Philadelphia Mint and at the Treasury Building as backing for gold certificates. After the government stopped paying out gold coins at face value in April 1933, and then issued the gold recall in 1934, most 1931 double eagles were melted. No more than 150 coins can be accounted for today, and the actual number is probably 100 to 120 pieces. The survivors are predominantly Mint State, generally in the MS-62 to MS-65 grade range. A small number of truly exceptional pieces have been certified MS-66 or MS-67 by PCGS and NGC.