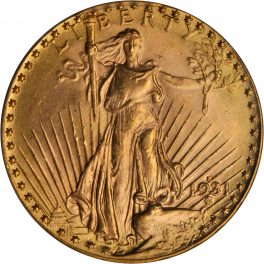 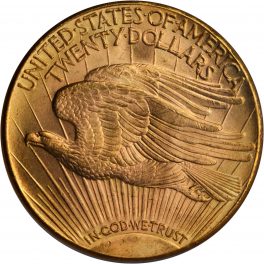 When encountered at all, the 1931-D double eagle is almost always sharply struck with highly lustrous and attractive surfaces.
The story of the 1931-D St. Gaudens double eagle mirrors that of the 1931, with most of the coins remaining in government storage as backing for gold certificates. This issue is not known to have circulated to any great extent, if at all, although examples could have been obtained for face value through the Treasury Department as late as the summer of 1932. In fact, most survivors were probably saved through direct acquisition from either the Treasury Department or the Philadelphia Mint before the federal government stopped paying out gold coins for face value in April 1933. Those that remained in government holding after that time were melted in 1937. Today, only 100 to 150 coins are believed extant, almost all of which are Mint State, mostly of Choice quality and grading MS-63 or MS-64. The finest certified example is the PCGS MS-66+ that was once part of the Amon G. Carter, Jr. Family Collection auctioned by Stacks in January 1984.