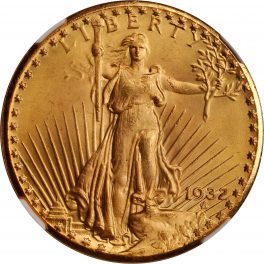 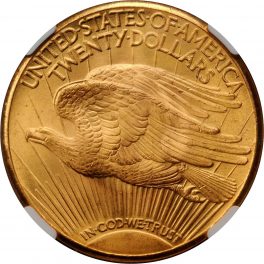 Almost all known examples are sharply struck and lustrous with minimally abraded, if not virtually pristine surfaces.
The final collectible issue in the Saint-Gaudens double eagle series, the 1932 is a classic numismatic rarity. As far as is known, this issue was never released into commercial channels, and the entire mintage was earmarked for storage in government vaults as backing for gold certificates. Even so, a small number of coins were obtained directly from the Treasury Department or Philadelphia Mint for face value shortly after striking. Such activity came to an end in April 1933, and in 1937 the federal government melted all remaining 1932 St. Gaudens double eagles still on hand. No more than 100 examples are believed extant, perhaps as few as 60 to 80 pieces. All known survivors are Mint State, and most are of Choice to Gem quality from having been obtained directly from government holdings. A single MS-66+ graded by PCGS is the finest certified.