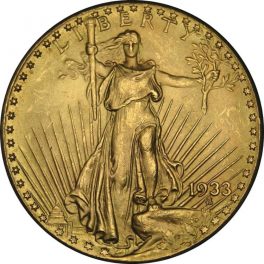 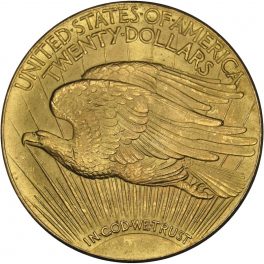 The few 1933 double eagles known are boldly to sharply struck with excellent, fully frosted luster and attractive surfaces.
The final regular issue double eagle in U.S. coinage history, the 1933 St. Gaudens, is a legendary rarity with a fascinating history. The 445,500 examples struck by the Philadelphia Mint were never officially distributed, either into commercial channels or to contemporary numismatists, per the current stance of the Treasury Department. Even so, a small number of coins found their way into the hands of interested parties from supplies stored at the Philadelphia Mint, probably in exchange for double eagles of earlier dates. Virtually the entire mintage was subsequently melted in early 1937. After the fact, beginning in 1944, the federal government maintained that the ownership of a 1933 double eagle was illegal. Indeed, many of the coins that found their way into numismatic hands at or near the time of striking were either confiscated or surrendered to the federal government during the late 1940s and early 1950s, after which they were melted. There is one exception, however, and that is the coin thought to have once been in the collection of King Farouk of Egypt, although some believe it was one of the four coins once owned by R.E. Naftzger, Jr. and later sold to a Dallas collector. When Farouk was deposed by a military junta in 1952, he fled into exile and his collection was seized by the Egyptian government. Although Sothebys sold most of Farouks coins at auction in 1954, the 1933 double eagle was withdrawn from the sale and went into hiding. A coin described as once being from the Farouk Collection resurfaced in London in the 1990s (perhaps even earlier) and was acquired by dealer Steve Fenton, who took the coin to New York City to sell to a prospective buyer. It was seized by the federal government at that time. However, after a lengthy legal battle, the government declared the coin legal to own. It was consigned to Sothebys/Stacks, who sold it through a special auction on July 30, 2002 for $7,590,020 to an anonymous telephone bidder.
Twelve other 1933 double eagles are positively confirmed to exist, two of which are part of the National Numismatic Collection in the Smithsonian Institution. The other 10 examples were voluntarily surrendered to the Secret Service for authentication in September 2004 by Joan S. Langbord, daughter of Philadelphia jeweler Israel Switt who is known to have played a part in the distribution of many of the 1933 double eagles that ended up in private hands. The Secret Service immediately seized the coins as illegal to own and, as of 2016 all attempts by Langbord to regain possession of the coins have been turned down by the courts.
R.E. Naftzger, told Q. David Bowers that in the 1940s he purchased four 1933 double eagles. One of those coins apparently found its way to a Dallas collector, coming up for sale in the 1980s through dealer Michael G. Brownlee. Although several prominent numismatists report having seen and/or been offered this coin, its current whereabouts are unknown, and some believe that it may be the coin sold as ex Farouk. Also unaccounted for are the other three examples acquired by Naftzger in the 1940s. Presumably these coins are still in hiding, their owner(s) no doubt hoping that the federal government eventually changes its position and declares all 1933 double eagles legal to own.