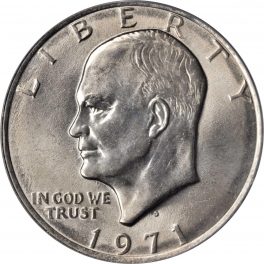 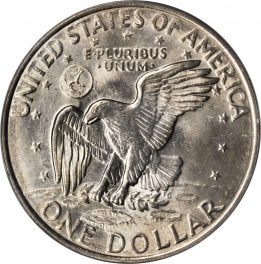 The 1971-D Eisenhower Dollar shows the standard reverse. It is important to note that the reverse globe sometimes shows some variation in the Gulf of MexicoÑhowever this variation was never confirmed by PCGS or NGC. The Denver Mint was better known for producing strongly struck coins, much moreso than the Philadelphia Mint. There were, however, some coins that still exhibited a weak strike. The only more valuable coins that you will find from this year and mintmark are the Special Mint Set coins that were shortly produced. Low grade coins are rare, as many never saw enough circulation to wear the coin to an extreme amount. The Peg Leg variety occurs when the serif of the “R” runs into the head of Eisenhower instead of ending. Look for these coins to trade close to face value unless there is an odd variety or a Peg Leg. If you happen to find a Peg Leg coin, please contact us for authenification.

The text on the Eisenhower $1 coin reads as follows. Obverse: LIBERTY; Date; IN GOD WE TRUST | Reverse: UNITED STATES OF AMERICA; E PLURIBUS UNUM; ONE DOLLAR.

If the text on your Eisenhower Dollar does not match what is shown above, then your coin may either be fake or a different variety not yet discovered. If you are uncertain about the authenticity of your coin, please contact one of Coin.com’s trusted professional coin dealers to have your coin looked at.