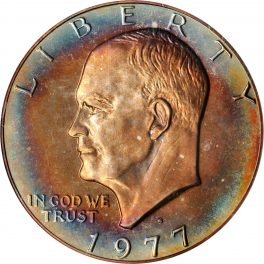 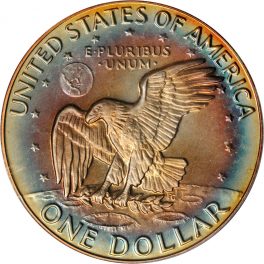 The Eisenhower Dollar first entered production in 1971 after years of design. This modern coin can be tricky for collectors to figure out because of their different metal contents and different varieties. During the 1972 production year, there were three different die varieties use for the reverse, whose main differences were found in the Earth above the eagle. The entire reverse of the coin was based off of an Apollo 11 mission badge.

Type 1 Reverse– The Type 1 Reverse is sometimes referred to as the Reverse A. This reverse shows a low relief version of the Earth above the eagle. You can recognize this coin by the size of Maine in the upper United States. Maine is very large and has a flat top. The top and bottom of Earth appear to be flat. Three Islands appear directly below Florida and extend to the right. The tip of South America rises upwards toward the Caribbean. The details you see will of course depend on the condition.

Type 2 Reverse– The Type 2 Reverse is sometimes referred to as the Reverse B. On this reverse, the Gulf of Mexico is more rounded than the previous type. Furthermore, if you look at the Eagle, you will notice that this one does not have an eye brow. The three Caribbean Islands slant downward but are in the same location. The Islands, though, appear to be one large blob. The Type 2 reverse was seen in a very limited production. The die was used for mainly the 1971-D.

Type 3 Reverse– The Type 3 Reverse is sometimes referred to as the Reverse E. The Earth on this type is actually round. The largest noticeable change is the ridge that runs along the East coast of the United States. This is a high relief version that helps make the United States more distinguishable. The three Caribbean Islands are positioned in more of a triangle stance rather than in a line. This coin also shows hints of the top of Africa.

Other Types– As you may have noticed, we skipped from Reverse B to Reverse E. Reverse C shows an island that is slanting downward and extends to the 4 o’clock position on the coin. The eye on the eagle has been made large. This Reverse was only used on 1971-S Proofs. Reverse D shows a flat United States, but the North Western section of the country is faded out. Canada has disappeared and South America fades. These were also used on a large number of 1972 Dollars but should be considered more rare.

During 1973, 1974, and 1976, there were silver and clad coins produced at the San Francisco Mint that bore the “S” Mintmark. It can be extremely hard to tell which version you have, so contact an expert to have yours verified. However, if you’d like a trick, set a small piece of ice on top of the coin. If the ice melts immediately then your coin is most likely silver. If the ice sits on the coin for several seconds before melting, then your coin is most likely clad.

During the 1975 and 1976 years (Produced in 75-76 but released in 1976), the Eisenhower Dollar featured a new reverse that showed the Liberty Bell and a moon design. Although this is the only that this coin was produced, it does not increase its rarity by any means.