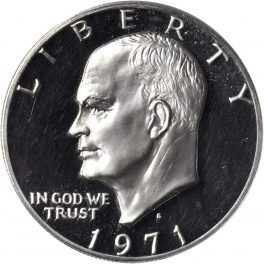 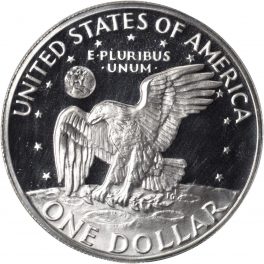 The 1971-S Silver Eisenhower Dollar are very common in lower uncirculated grades. These coins were first sold to collectors at a small premium, and most of those coins still exsist in the same condition. The Eisenhower Dollar is known for being a lack-luster coin. Many of these coins, especially the Silver 1971s, are covered with bag marks and have very weak strikes. There are, however, a few interesting varieties to look for with this date. The first variety is a double die obverse. There are several different looks that this coin could take on, but in every case the phrase “In God We Trust” is doubled. Next is the Peg Leg variety. Just like the previous 1971-D coin, the R on the reverse is Peg Legged. Instead of the coin having a serif, it comes to an abrupt stop. Finally there is the repunched mintmark. This mintmark will look very foggy and covered over. You will likely look at the mintmark and have trouble reading where it is from. There may be other variations that have yet to be found. According to several sources, there are rumors of altered die coins on the market, but no one has yet to find one. These coins are worth around three times face value because of their silver content. Even in higher states, such as PR-68, they still hardly make it out of the $20 price range.

The text on the Eisenhower $1 coin reads as follows. Obverse: LIBERTY; Date; IN GOD WE TRUST | Reverse: UNITED STATES OF AMERICA; E PLURIBUS UNUM; ONE DOLLAR.

If the text on your Eisenhower Dollar does not match what is shown above, then your coin may either be fake or a different variety not yet discovered. If you are uncertain about the authenticity of your coin, please contact one of Coin.com’s trusted professional coin dealers to have your coin looked at.