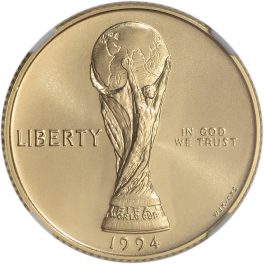 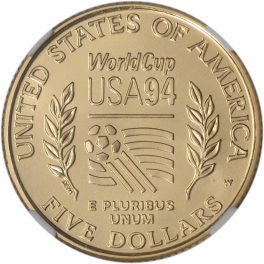 The 1994 $5 Gold World Cup Commemorative Coin is similar to the silver and clad coins that commemorated this same event. In 1994, the World Cup was held in the United States of America for the first time. The obverse of the coin shows the trophie that was awarded to the winning team, while the reverse shows the logo of the games, as well as the year that they were played. This coin was minted at the West Point Mint.
Obverse: Liberty – In God We Trust – 1994 | Reverse: United States of America – Five Dollars – World Cup USA 94 – E Pluribus Unum