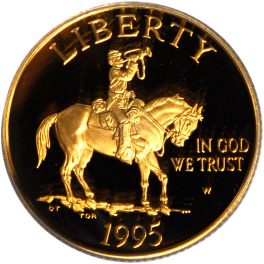 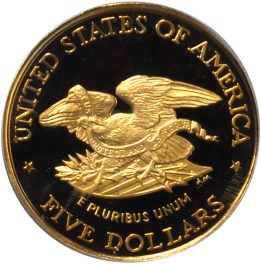 The 1995 $5 Gold Civil War Commemorative Coin is a powerful representation of the Civil War heros. The obverse shows a trumpet boy sitting on the back of a horse. It is important to note that the coin is showing us that the trumpet player did not die in battle, but that he is honoring those who did. In the United States, the horses feet determine how the rider died. A horse with two front legs raised means the rider died in battle. A horse with one front leg raised means that the rider sustained injuring during battle that later led to their death. A horse with all four hooves on the ground shows that the rider died of natrual causes after the battle had ended. This coin was minted at the West Point Mint.
Obverse: Liberty – In God We Trust – 1995 | Reverse: United States of America – Five Dollars – E Pluribus Unum