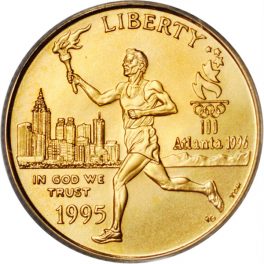 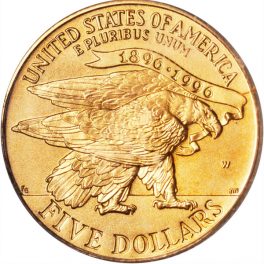 The 1995 $5 Gold Olympic Torch Runner Commemorative Coin is yet another Olympic commemorative for the 100th anniversary of the modern Olympic games being played. The events were held in Atlanta, Georgia. The obverse shows the runner carrying the torch past the skyline of the city. This coin was minted at the West Point Mint.
Obverse: Liberty – Atlanta 1996 – 1995 – In God We Trust | Reverse: United States of America – Five Dollars – E Pluribus Unum – 1896 1996