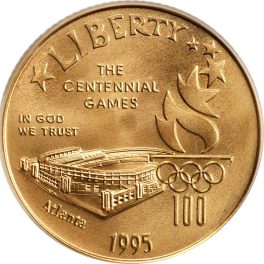 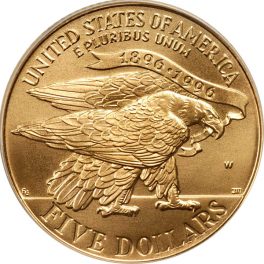 The 1995 $5 Gold Olympic Stadium Commemorative Coin shows on the obverse the location of the 1996 Olympic games. They were played in Atlanta, GA. The back of the coin is different than most Olympic coins. Instead of showing the Olympic logo and a torch, this coin shows an eagle holding a banner. This coin was minted at the West Point Mint.
Obverse: Liberty – 1995 – Atlanta – In God We Trust – The Centennial Games | Reverse: United States of America – Five Dollars – E Pluribus Unum – 1896 1996