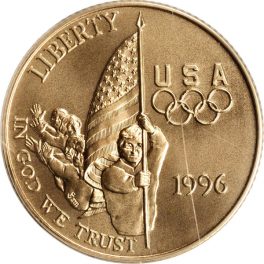 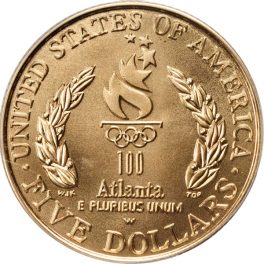 The 1996 $5 Gold Olympic Flag Commemorative Coin was created to show the patriotism of the United States citizens during the Olympic games. The coin shows an American flag on the obverse, and the reverse shows the typical Olympic logo that is so popular on coins of this kind. This coin was minted at the West Point Mint.
Obverse: Liberty – USA – 1996 – In God We Trust | Reverse: United States of America – Five Dollars – Atlanta – E Pluribus Unum