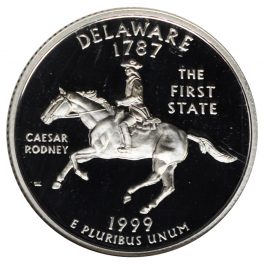 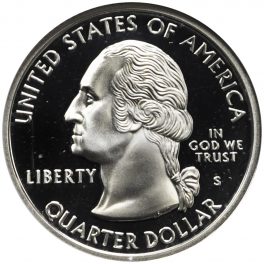 The obverse of the 1999 Delaware State Quarter shows the standard Washington Quarter design with a few alterations. The Washington Quarter, that ran from 1932-1998, had the date on the obverse, as well as the word “Liberty.” This design was changed slightly with the introduction of the State Quarters, and later the Territory Quarters and National Park Quarters. The new design still shows Washington looking left, however the obverse text now reads “United States of America – Liberty – In God We Trust – Quarter Dollar.” The reverse of this coin depicts a rider on a horse. The horse and rider are pointed towards the left side of the coin. The rider on the horse is Caesar Rodney. Rodney was famous for his 80 mile ride to Independence Hall in Philadelphia, PA where he became the last person to sign the Declaration of Independence and declare freedom from England. Rodney was in Dover, Delaware taking care of some issues with citizens when a representative sent word to him that they needed a tie-breaker in order to progress with the signing of the Declaration. Rodney made the horse-back ride to Philadelphia despite a severe illness. Rodney served as the President of Delaware during the Revolutionary War, and was also a well known politician in his state. The designer of the coin is unknown as there were eight nearly identical submissions for the design of the coin. Typically, credit is given to Eddy Seger who served as an art and drama teacher at a local school. Submissions for the state coin were taken from any citizen of the state. The Delaware Art Council issued a statement that citizens should submit their ideas for the state coin, and there ended up being over 300 submissions. Out of these 300 submissions, only 3 were sent to the United States Mint for review. The United States Mint conducted a telephone poll for the three designs. Out of 1,519 votes, Rodney received 948, an allegorical Miss. Liberty received 235, and the pen and quill design received 336 votes. On December 7, 1998, the Philadelphia Mint hosted “Delaware Day” in which they invited Delaware State Officials, Mint officials, Citizens Commemorative Coin Advisory members, and other official personnel. Press Operator John Hill invited each guest to strike their very own Delaware State Quarter. However, these quarters had to be sent to the participants after the official release of the quarters. The official release occurred on January 4, 1999. This marked the beginning of the 50 States Commemorative Quarters era. This was the 1st coin released in the State Quarters program. The reverse text of the coin reads “Delaware 1787 – The First State – Caesar Rodney – 1999 – E Pluribus Unum.” All of the State Quarters were clad, meaning that they were seventy-five to eighty percent copper, and the rest was composed of nickel. The core of the coins were solid copper. These coins, however, were produced in silver for special Silver Proof Sets. The coins minted in included Delaware, Pennsylvania, New Jersey, Georgia, and Connecticut.
Errors on the 1999 Delaware State Quarter There is only one error for the state of Delaware. Due to die cracks at the Philadelphia Mint, it appears as if the horse is spitting. Collectors who come across this coin will notice a hairline crack that extends from the horse’s mouth towards the edge of the coin. Depending on the size of the crack, a collector could find their error coin valued between $5 and $20. However, the average circulation State Quarter is only worth the face value of $0.25. These coins can be spent, saved, or taken to the bank.
Varieties on the 1999 Delaware State Quarter This coin, designed by John Flanagan and William Cousins was produced in a silver variety as part of proof sets. There were a total of 804,565 silver coins produced for this series. They are composed of 90% silver and 10% copper. The average price of the single silver coin ranges from $5 to $10, depending on the grade. The easy indicator to determine if your coin is silver is by the mint mark. The silver quarters will have an “S” mintmark, rather than a “P” or “D.” In addition to the silver quarters, late-night TV. began selling gold plated State Quarters in an attempt to con viewers into thinking that the coin would be worth a lot more. Unfortunately, the amount of gold that it takes to plate a quarter is very insignificant, and these gold plated quarters have no value in the collector community.

Value of 1857 Braided Hair Half Cent