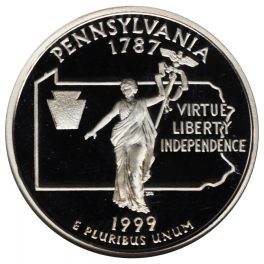 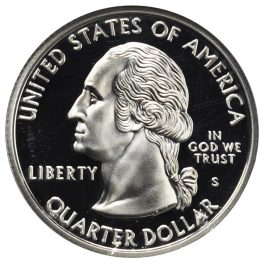 The obverse of the 1999 Pennsylvania State Quarter shows the standard Washington Quarter design with a few alterations. The Washington Quarter, that ran from 1932-1998, had the date on the obverse, as well as the word “Liberty.” This design was changed slightly with the introduction of the State Quarters, and later the Territory Quarters and National Park Quarters. The new design still shows Washington looking left, however the obverse text now reads “United States of America – Liberty – In God We Trust – Quarter Dollar.” The reverse of this coin depicts the 14-foot Statue of Commonwealth, which sits on top of the capital’s dome in Harrisburg, PA. The original statue was created by a sculptor in New York named Orland Hinton Perry, and it happens to be unknown to many of the residents of Pennsylvania that the statue sits atop their own state house. The statue has sat in the same position since it was placed there in 1905. The statue’s two arms represent kindness and justice, as one extends and the other holds the scepter. Behind Commonwealth is an outline of the state with a keystone in the upper left-hand corner. The keystone represents the state’s nickname of “They Keystone State.” Pennsylvania serves as the Keystone state because of its positioning within the original 13 colonies. Pennsylvania was known as the focal point of economic, social and political development for the United States. The importance of the keystone lies in its place in the construction process. For those not familiar, a keystone would be places at the top of an arch that would in turn hold the entire arch together. This represents Pennsylvania holding the colonies together as one unit and providing that strong foundation. The mace in Commonwealth’s left hand is representative of justice and has an eagle perched on top. To the right of the coin is the state motto, which reads “Virtue, Liberty, and Independence.” As with most states, a competition was held to design the quarter. There were over 5,300 sketches submitted to the Governor, Tom Ridge. Five designs were sent to the United States Mint for further evaluation. Unlike the state of Delaware, the final design was selected by a committee instead of telephone voters. The United States Mint provided a special ceremony to release the coins. Twenty-Four children from General George A. McCall Elementary School were invited to operate the 82-ton press, and to make their own state quarters. As soon as the first button had been pressed on the machine, the Philadelphia and Denver Mints released several million quarters into circulation. This was the 2nd coin released in the Statehood Quarters program. The reverse text of the coin reads “Pennsylvania 1787- Virtue Liberty Independence – 1999 – E Pluribus Unum.” All of the Statehood Quarters were clad, meaning that they were seventy-five to eighty percent copper, and the rest was composed of nickel. The core of the coins were solid copper. These coins, however, were produced in silver for special Silver Proof Sets. The coins minted in included Delaware, Pennsylvania, New Jersey, Georgia, and Connecticut.
Errors on the 1999 Pennsylvania State Quarter There are currently no known errors of this coin. If you ever run across anything that looks unusual with the Pennsylvania State Quarter, please contact one of our experts to have the error verified, or send the coin to a professional grading company for their opinion. However, the average circulation State Quarter is only worth the face value of $0.25. These coins can be spent, saved, or taken to the bank.
Varieties on the 1999 Pennsylvania State Quarter This coin, designed by John Flanagan and John Mercanti was produced in a silver variety as part of proof sets. There were a total of 804,565 silver coins produced for this series. They are composed of 90% silver and 10% copper. The average price of the single silver coin ranges from $5 to $10, depending on the grade. The easy indicator to determine if your coin is silver is by the mint mark. The silver quarters will have an “S” mintmark, rather than a “P” or “D.” In addition to the silver quarters, late-night TV. began selling gold plated State Quarters in an attempt to con viewers into thinking that the coin would be worth a lot more. Unfortunately, the amount of gold that it takes to plate a quarter is very insignificant, and these gold plated quarters have no value in the collector community.