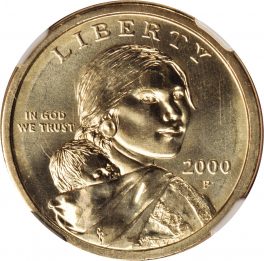 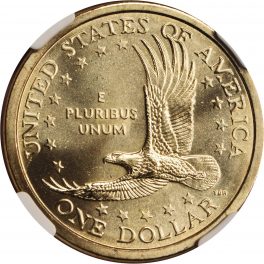 The 2000-P Cheerios Sacagawea dollar is one of the great modern rarities in coin collecting. It also has a wonderful story to go along with it. In late 1999 General Mills ran a promotion where one in every 2,000 boxes of Cheerios would have a 2000-P Sacagawea gold dollar inside of it, as well as a 2000-P penny. This marketing and promotion was all done ahead of the official release of the Sacagawea gold dollars on January 26th 2000. It wasn’t until 2005 that anyone realized that the 2000-P Sacagawea coins in the original Cheerios packaging were different. The Cheerios coins have highly detailed diagonal tail feathers. The rest of the non-Cheerios coins have parallel tail feathers. Now it is over 17 years since the coins were originally released and it is thought that only about 80 of the original 5,500 Cheerios mintage has been accounted for. There is certainly no reason to think that the other 5,420 coins were destroyed or never found. That means that right now there are over 5,000 2000-P Cheerios dollars still in the wild waiting to be found. Cheerios dollars regularly sell for around $5,000 in today’s market. Of course please keep in mind that there are literally 100s of millions of non-Cheerios 2000-P Sacagawea gold dollars. Make sure your tail feathers are diagonal as pictured below. We are very interested in buying Cheerios coins. Contact us at Info@Coinappraiser.com for more information.