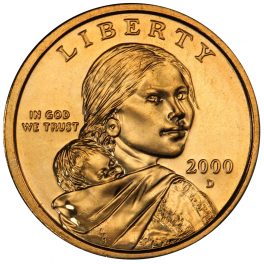 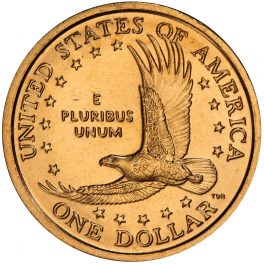 Sacagawea gold dollar coins were minted first from 2000 until 2008 and again with different reverse designs starting in 2009.  These are popular coins but well over a billion have been minted since 2000.  There are a couple of special varieties that are collectible like the 2000-P Cheerios coin.  However, your regular strike Sacagawea coins are still just worth $1 and will likely only be worth a dollar for the foreseeable future.  A moderate exception would be that some of the older rolls do sell for a very small premium over their face value.  All Sacagawea coins, while gold in color, have absolutely no precious metals value.  They are made of copper, manganese, brass, zinc, and nickel.  Despite their limited collector value, Sacagaweas are still a fun coin with a lot of history.

Our guide at the bottom of this page lists the mintage figures and historical information about all the various Sacagawea coins from different years.  Here are some quick facts that collectors might find of interest:

-The legal authorization to mint a new dollar coin was passed in 1997, but the first coins were not released until January 2000.
-The general public actually preferred a coin showing the statue of liberty, but the Sacagawea design was selected by the officials in charge of the coin.  Thanks to the coin, today Sacagawea is widely recognized.  She was certainly not a household name in the late 1990s before the coin was released to the public.
-No images of the actual person Sacagawea exist (she died in 1812).  The woman pictured on the coin is actually a 22 year old college student named Randy’L He-dow Teton.
-Most Sacagaweas are used in the United States in vending machines or hoarded by collectors who hope the coins will someday be worth a lot of money.  We don’t see the coins too much in commerce for that reason.  However, the USD is an official currency in Ecuador and Sac dollars are the preferred day to day denomination in Ecuador.

Design 2000-2008:
Sacagawea has her infant in a papoose over her shoulder.  Her son was named Jean Baptiste Charbonneau.  The back of the coin features a more familiar design.  It has a flying eagle, 17 stars, and the traditional text of E Pluribus Unum – United States of America – One Dollar.  The front of the coin says LIBERTY and In God We Trust.  There will be a P, D, or S mint mark under the year.  And the back of each coin also has the initials TDR for Thomas D. Rogers Sr, the mint sculptor and engraver.