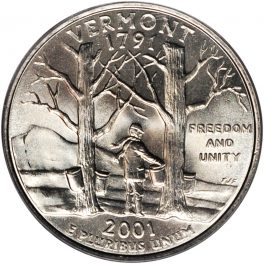 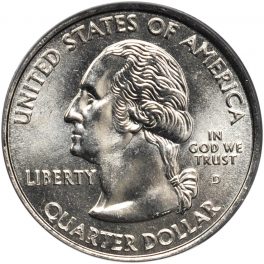 The obverse of the 2001 Vermont State Quarter shows the standard Washington Quarter design with a few alterations. The Washington Quarter, that ran from 1932-1998, had the date on the obverse, as well as the word “Liberty.” This design was changed slightly with the introduction of the State Quarters, and later the Territory Quarters and National Park Quarters. The new design still shows Washington looking left, however the obverse text now reads “United States of America – Liberty – In God We Trust – Quarter Dollar.” The reverse of this coin depicts a man beside two trees. Hanging from each tree are two buckets. In the background there is an image of a large mountain. The man is wrapped in a scarf and to the right of the tree there is text. Vermont is well know for producing large quantities of maple syrup. The mountain in the background is Camel’s Hump Mountain. Camel’s Hump is the tallest undeveloped mountain in Vermont, and the third tallest of any mountains in Vermont. The mountain has a very distinct shape which makes it easily recognizable to locals. The buckets in the foreground are a sap collection site where maple syrup is being produced. The interesting thing about the illustration for this coin is that there is no tree grove where these two trees would normally be located. As other experts suggest, perhaps the grove is in the background. However, this caught residents off guard when there were two sugaring trees standing alone. Previous Vermont coinage for the state has shown the sun and rays, but this design offers a friendly change in scenery. The Governor of Vermont appointed the Art Council to develop a design. There were five designs presented to the Governor, and each of them contained the famous Camel’s Hump Mountain. Several surveys were conducted to choose the winner, but the decision ultimately came down to the opinion of the governor. The artist who drew the final design owned YeloDog Design in Waterbury. However, in similar tradition to all other coin artist, the United States attributed credit for the illustration to William Cousins, the engraver, rather than the real artist, Sarah-Lee Terrat. This was the 14th coin released in the Statehood Quarters program. The reverse text of the coin reads “Vermont 1791 – Freedom and Unity – 2001 – E Pluribus Unum.” All of the Statehood Quarters were clad, meaning that they were seventy-five to eighty percent copper, and the rest was composed of nickel. The core of the coins were solid copper. These coins, however, were produced in silver for special Silver Proof Sets. The coins minted in included New York, North Carolina, Rhode Island, Vermont, and Kentucky.
Errors on the 2001 Vermont State Quarter There are currently no known errors of this coin. If you ever run across anything that looks unusual with the Vermont State Quarter, please contact one of our experts to have the error verified, or send the coin to a professional grading company for their opinion. However, the average circulation State Quarter is only worth the face value of $0.25. These coins can be spent, saved, or taken to the bank.
Varieties on the 2001 Vermont State Quarter This coin, designed by John Flanagan and James Ferrell was produced in a silver variety as part of proof sets. There were a total of 889,694 silver coins produced for this series. They are composed of 90% silver and 10% copper. The average price of the single silver coin ranges from $5 to $10, depending on the grade. The easy indicator to determine if your coin is silver is by the mint mark. The silver quarters will have an “S” mintmark, rather than a “P” or “D.” In addition to the silver quarters, late-night TV. began selling gold plated State Quarters in an attempt to con viewers into thinking that the coin would be worth a lot more. Unfortunately, the amount of gold that it takes to plate a quarter is very insignificant, and these gold plated quarters have no value in the collector community.