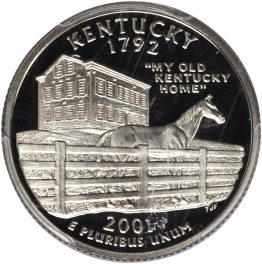 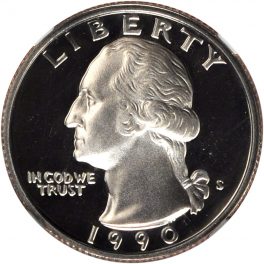 The obverse of the 2001 Kentucky State Quarter shows the standard Washington Quarter design with a few alterations. The Washington Quarter, that ran from 1932-1998, had the date on the obverse, as well as the word “Liberty.” This design was changed slightly with the introduction of the State Quarters, and later the Territory Quarters and National Park Quarters. The new design still shows Washington looking left, however the obverse text now reads “United States of America – Liberty – In God We Trust – Quarter Dollar.” The reverse of this coin depicts a horse being held within a fence. In the background of the image, there is a tall building that appears to be a mansion. Above the horse’s head is a quote. This quarter is actually showing Federal Hill. Federal Hill was the location where Stephen Foster wrote the song “My Old Kentucky Home,” the song that would become the state anthem. In the foreground is a thoroughbred horse used for racing. Kentucky is known for its horse land and for being the famous site of the annual Kentucky Derby. Like other coins before it, the coin was appointed a design committee. The Governor’s wife was put in charge of the Kentucky Quarter Project Committee. There were close to 1,800 designs received for the quarter. Out of the many designs, the committee narrowed down the finalist to twelve designs. Although there were twelve different designs, many of the designs were very similar in look and in subject. The designs included Daniel Boone, a thoroughbred mounted by a jockey, “My Old Kentucky Home” lyrics, Abraham Lincoln, and the final selected design of the horse behind a fence. The votes came in and the selection was narrowed down to two coins. However, the commission discarded the Lincoln design saying that it was not appropriate or well done. When the committee members took their drawings to the Mint officials, the officials would not look at the drawings. They would rather the commission describe what they wanted their coin to look like. This irked some of the committee members, and there was never an actual artist attributed to the coin since it was the work of a Mint official. This was the 15th coin released in the Statehood Quarters program. The reverse text of the coin reads “Kentucky 1792 – “My Old Kentucky Home” – 2001 – E Pluribus Unum.” All of the Statehood Quarters were clad, meaning that they were seventy-five to eighty percent copper, and the rest was composed of nickel. The core of the coins were solid copper. These coins, however, were produced in silver for special Silver Proof Sets. The coins minted in included New York, North Carolina, Rhode Island, Vermont, and Kentucky.
Errors on the 2001 Kentucky State Quarter There are currently no known errors of this coin. If you ever run across anything that looks unusual with the Kentucky State Quarter, please contact one of our experts to have the error verified, or send the coin to a professional grading company for their opinion. However, the average circulation State Quarter is only worth the face value of $0.25. These coins can be spent, saved, or taken to the bank.
Varieties on the 2001 Kentucky State Quarter This coin, designed by John Flanagan and James Ferrell was produced in a silver variety as part of proof sets. There were a total of 889,694 silver coins produced for this series. They are composed of 90% silver and 10% copper. The average price of the single silver coin ranges from $5 to $10, depending on the grade. The easy indicator to determine if your coin is silver is by the mint mark. The silver quarters will have an “S” mintmark, rather than a “P” or “D.” In addition to the silver quarters, late-night TV. began selling gold plated State Quarters in an attempt to con viewers into thinking that the coin would be worth a lot more. Unfortunately, the amount of gold that it takes to plate a quarter is very insignificant, and these gold plated quarters have no value in the collector community.