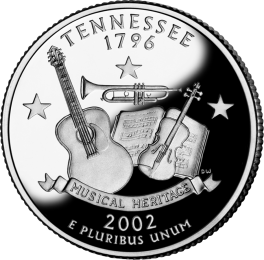 The obverse of the 2002 Tennessee State Quarter shows the standard Washington Quarter design with a few alterations. The Washington Quarter, that ran from 1932-1998, had the date on the obverse, as well as the word “Liberty.” This design was changed slightly with the introduction of the State Quarters, and later the Territory Quarters and National Park Quarters. The new design still shows Washington looking left, however the obverse text now reads “United States of America – Liberty – In God We Trust – Quarter Dollar.” The reverse of this coin depicts three different instruments, which each represent a region of Tennessee. In addition to the three instruments, there are three stars that also represent those said regions. From left to right, there is a guitar, trumpet, and a fiddle. The guitar represents the musical tradition of Nashville, located in mid-Tennessee. Nashville is where country music stars go to make a name for themselves. The trumpet represents the blues and jazz music of Memphis, located on the Western boarder of Tennessee. Lastly, the fiddle represents the mountain music produced by the people of east-Tennessee. This music is commonly found in the Appalachian part of the state. Underneath the instruments is a banner that reads “Musical Heritage,” making it clear what the meaning of the coin is. The coin was decided on under order of Governor Don Sundquist, through a state-wide competition. There were almost 1,000 submissions that were then picked through by seven members of a committee. This coin is one of the first where actual credit was given to the designer. After sending the final drawing to the Mint, the Mint developed a revised design and presented it back to Tennessee a year later. After release of the coin, the Mint featured Shawn Stookey in an article talking about his coin design. Stookey, a Tennessee native, is a school teacher at Lakeview Elementary. If you are interested in finding odd coins, the Tennessee coin is in fact one. Although it wasn’t a “Mint Error” coin, the guitar on all Tennessee coins is missing one of the strings. One string is attached to the top fret, but disappears once it passes over the hole in the base of the guitar. This was the 16th coin released in the Statehood Quarters program. The reverse text of the coin reads “Tennessee 1796 – Musical Heritage – 2002 – E Pluribus Unum.” All of the Statehood Quarters were clad, meaning that they were seventy-five to eighty percent copper, and the rest was composed of nickel. The core of the coins were solid copper. These coins, however, were produced in silver for special Silver Proof Sets. The coins minted in included Tennessee, Ohio, Louisiana, Indiana, and Mississippi
Errors on the 2002 Tennessee State Quarter There are currently no known errors of this coin. If you ever run across anything that looks unusual with the Tennessee State Quarter, please contact one of our experts to have the error verified, or send the coin to a professional grading company for their opinion. However, the average circulation State Quarter is only worth the face value of $0.25. These coins can be spent, saved, or taken to the bank.
Varieties on the 2002 Tennessee State Quarter This coin, designed by John Flanagan and Donna Weaver was produced in a silver variety as part of proof sets. There were a total of 888,826 silver coins produced for this series. They are composed of 90% silver and 10% copper. The average price of the single silver coin ranges from $5 to $10, depending on the grade. The easy indicator to determine if your coin is silver is by the mint mark. The silver quarters will have an “S” mintmark, rather than a “P” or “D.” In addition to the silver quarters, late-night TV. began selling gold plated State Quarters in an attempt to con viewers into thinking that the coin would be worth a lot more. Unfortunately, the amount of gold that it takes to plate a quarter is very insignificant, and these gold plated quarters have no value in the collector community.