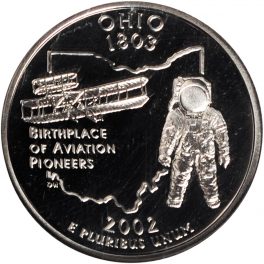 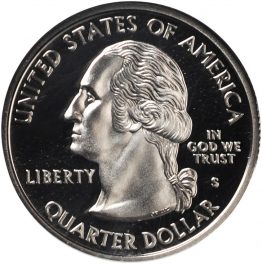 The obverse of the 2002 Ohio State Quarter shows the standard Washington Quarter design with a few alterations. The Washington Quarter, that ran from 1932-1998, had the date on the obverse, as well as the word “Liberty.” This design was changed slightly with the introduction of the State Quarters, and later the Territory Quarters and National Park Quarters. The new design still shows Washington looking left, however the obverse text now reads “United States of America – Liberty – In God We Trust – Quarter Dollar.” The reverse of this coin depicts an airplane resembling the Wright Brother’s first plane to the left, an astronaut to the right, and the state shape placed in the background of the image. Underneath the airplane there is text. Starting from left to right, the plane represents the birthplace of Orville Wright, the inventor and pilot of the first successful airplane. For more information on Orville Wright, please refer to the North Carolina reverse. The astronaut represents two of the most famous men to visit space, Neil Armstrong and John Glenn. These two men were born in Ohio. This is why the state of Ohio received the nickname “Birthplace of Aviation Pioneers.” The phrase on the coin originally read “Birthplace of Aviation,” however the phrasing was changed at some point. The Director of the Mint is recorded saying that he doesn’t know how, or why, it was changed as he never approved it. However, it all worked okay. Experts began to discuss the fact that the first flight took place in North Carolina, and that the first hot air balloon flight had taken place centuries before. Shortly before release, the Mint was made aware of an error and rushed to fix the coin. The image used on the coin is based off of a photograph taken of Buzz Aldrin. However, Aldrin was from the state of New Jersey, and the Mint has very strict rules that no living person can grace the front of a coin. So, alterations were made to show a generic astronaut. This was the 17th coin released in the Statehood Quarters program. The reverse text of the coin reads “Ohio 1803 – Birthplace of Aviation Pioneers – 2002 – E Pluribus Unum.” All of the Statehood Quarters were clad, meaning that they were seventy-five to eighty percent copper, and the rest was composed of nickel. The core of the coins were solid copper. These coins, however, were produced in silver for special Silver Proof Sets. The coins minted in included Tennessee, Ohio, Louisiana, Indiana, and Mississippi
Errors on the 2002 Ohio State Quarter There are currently no known errors of this coin. If you ever run across anything that looks unusual with the Ohio State Quarter, please contact one of our experts to have the error verified, or send the coin to a professional grading company for their opinion. However, the average circulation State Quarter is only worth the face value of $0.25. These coins can be spent, saved, or taken to the bank.
Varieties on the 2002 Ohio State Quarter This coin, designed by John Flanagan and Donna Weaver was produced in a silver variety as part of proof sets. There were a total of 888,826 silver coins produced for this series. They are composed of 90% silver and 10% copper. The average price of the single silver coin ranges from $5 to $10, depending on the grade. The easy indicator to determine if your coin is silver is by the mint mark. The silver quarters will have an “S” mintmark, rather than a “P” or “D.” In addition to the silver quarters, late-night TV. began selling gold plated State Quarters in an attempt to con viewers into thinking that the coin would be worth a lot more. Unfortunately, the amount of gold that it takes to plate a quarter is very insignificant, and these gold plated quarters have no value in the collector community.