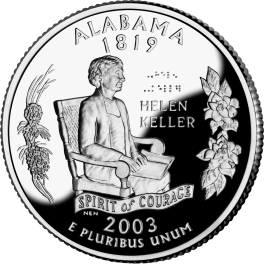 The obverse of the 2003 Alabama State Quarter shows the standard Washington Quarter design with a few alterations. The Washington Quarter, that ran from 1932-1998, had the date on the obverse, as well as the word “Liberty.” This design was changed slightly with the introduction of the State Quarters, and later the Territory Quarters and National Park Quarters. The new design still shows Washington looking left, however the obverse text now reads “United States of America – Liberty – In God We Trust – Quarter Dollar.” The reverse of this coin depicts Helen Keller reading a book written in Braille. On the cover of the book, also in braille, is Helen Keller’s name. Helen Keller was born in 1880 in Alabama and lost her ability to hear and see as a young child. A banner saying a “Spirit of Courage” flies above the date on the coin. This banner represents all that Keller did despite her disabilities. To either side of the seated Helen Keller are embellishments on the left and right. Keller looks towards the right side of the coin. Helen Keller is quite an interesting subject to explore. At the age of 19 months, Keller lost three of her five senses due to an illness that she came down with. Keller, later in life, became a Radcliffe College graduate despite these disabilities. She worked along side Alexander Graham Bell with the help of her assistant Anne Sullivan. This coin was shrouded in controversy for some of its depictions. First, most people did not see Helen Keller as a fair representation of the state, or as a historical symbol to represent Alabama. Second, a poorly illustrated flower and branch appear on the coin. The state claimed that the flower and branch were from a Magnolia Tree, however, botanist say that the flower came from a red camellia. It seems interesting that the state would say the flower was a Magnolia, considering that the state flower was a camellia. The Governor of the state took submissions from young school children. Topics included very relevant state history, as well as social and racial history. And then there was the Keller design. The Commission set up by the Governor favored a design showing the state capitol building, while the governor favored various state symbols. When the Mint sent back the designs, the Commission still had their favorite design of the capitol. However, despite the recommendation of the Commission, the Governor chose a new design proposed by the Mint, a design with Helen Keller. This was the 22nd coin released in the Statehood Quarters program. The reverse text of the coin reads “Alabama 1819 – Helen Keller – Spirit of Courage – 2003 – E Pluribus Unum.” All of the Statehood Quarters were clad, meaning that they were seventy-five to eighty percent copper, and the rest was composed of nickel. The core of the coins were solid copper. These coins, however, were produced in silver for special Silver Proof Sets. The coins minted in included Illinois, Alabama, Maine, Missouri, and Arkansas
Errors on the 2003 Alabama State Quarter There are currently no known errors of this coin. If you ever run across anything that looks unusual with the Alabama State Quarter, please contact one of our experts to have the error verified, or send the coin to a professional grading company for their opinion. However, the average circulation State Quarter is only worth the face value of $0.25. These coins can be spent, saved, or taken to the bank.
Varieties on the 2003 Alabama State Quarter This coin, designed by John Flanagan and Norman Nemeth was produced in a silver variety as part of proof sets. There were a total of 1,125,755 silver coins produced for this series. They are composed of 90% silver and 10% copper. The average price of the single silver coin ranges from $5 to $10, depending on the grade. The easy indicator to determine if your coin is silver is by the mint mark. The silver quarters will have an “S” mintmark, rather than a “P” or “D.” In addition to the silver quarters, late-night TV. began selling gold plated State Quarters in an attempt to con viewers into thinking that the coin would be worth a lot more. Unfortunately, the amount of gold that it takes to plate a quarter is very insignificant, and these gold plated quarters have no value in the collector community.