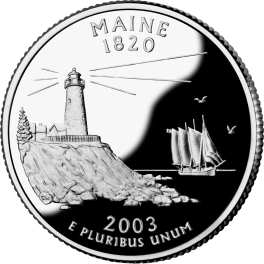 The obverse of the 2003 Maine State Quarter shows the standard Washington Quarter design with a few alterations. The Washington Quarter, that ran from 1932-1998, had the date on the obverse, as well as the word “Liberty.” This design was changed slightly with the introduction of the State Quarters, and later the Territory Quarters and National Park Quarters. The new design still shows Washington looking left, however the obverse text now reads “United States of America – Liberty – In God We Trust – Quarter Dollar.” The reverse of this coin depicts a lighthouse pointing out to sea. The lighthouse is perched upon a cliff and a ship is shown in the background. This lighthouse was significant for the state of Maine because it illuminates the area off of New Harbor, Maine which is widely known for its ship wrecks due to the sharp drop of the cliffs into the water. Congress approved the lighthouse’s construction just six years after Maine became a state in 1820. The lighthouse is called the Pemaquid Point Light. The Governor commissioned residents of the state to come up with designs for the coin. There were 200 different entries received. Angus King, the Governor sent these to the United States Mint. The final choices were two ideas that had to do with the first state to see the sunrise, one with Mount Katahdin, and the final being the lighthouse imagery. The Governor’s suggestion for the coin was called “Nation’s First Light.” It showed West Quoddy Head Light in Lubec, Maine, which was the easternmost point in the United States. There was controversy surrounding the design of the coin. The most popular design, initially, was the Mount Katahdin design. It featured a solid pine to the left, with both the mountain and a canoeist in the background. According to David Bowers, a majority of numismatists were largely in favor of this coin, recognizing that it would be a very well designed coin. However, the Mint sent back a revised design that was overbearing. The design now featured a canoe filled with five people, multiple trees, and a mountain that didn’t even look like Mount. Katahdin. People, including the designer, were outraged. The designer said that the redesign of his coin was “disgusting.” Daniel Carr, a popular designer for state quarters came to the rescue. He submitted a design for the lighthouse quarter. The quarter depicted a light house on the right side of the coin, with visible rays coming from its top. Even further to its right was a large, single, pine tree. Sailing just off the coast, and to the left side of the coin, was a large four-masted ship. The ship he was showing was in fact the Victory Chimes, a 170-foot long ship that had served the Maine area since 1954. As you can see with the final design, the lighthouse was moved to the left side of the coin and made considerably smaller. Carr, a Colorado resident, had to collaborate with a family in Rockland, Maine, to finish the design since it must be done by a resident of the state. Once again, though, people were outraged at how much the Mint changed the design of this coin. Carr had produced a beautiful coin that represented the lighthouse in its true form. However, the Mint altered the design and cluttered the coin. They added a large cliff underneath the light house, even though the lighthouse does not sit on a cliff. Furthermore, many residence say that the ship looks more like The Pride of Baltimore than it does the Victory Chimes. This was the 23rd coin released in the Statehood Quarters program. The reverse text of the coin reads “Maine 1820 – 2003 – E Pluribus Unum.” All of the Statehood Quarters were clad, meaning that they were seventy-five to eighty percent copper, and the rest was composed of nickel. The core of the coins were solid copper. These coins, however, were produced in silver for special Silver Proof Sets. The coins minted in included Illinois, Alabama, Maine, Missouri, and Arkansas
Errors on the 2003 Maine State Quarter There are currently no known errors of this coin. If you ever run across anything that looks unusual with the Maine State Quarter, please contact one of our experts to have the error verified, or send the coin to a professional grading company for their opinion. However, the average circulation State Quarter is only worth the face value of $0.25. These coins can be spent, saved, or taken to the bank.
Varieties on the 2003 Maine State Quarter This coin, designed by John Flanagan and Donna Weaver was produced in a silver variety as part of proof sets. There were a total of 1,125,755 silver coins produced for this series. They are composed of 90% silver and 10% copper. The average price of the single silver coin ranges from $5 to $10, depending on the grade. The easy indicator to determine if your coin is silver is by the mint mark. The silver quarters will have an “S” mintmark, rather than a “P” or “D.” In addition to the silver quarters, late-night TV. began selling gold plated State Quarters in an attempt to con viewers into thinking that the coin would be worth a lot more. Unfortunately, the amount of gold that it takes to plate a quarter is very insignificant, and these gold plated quarters have no value in the collector community.