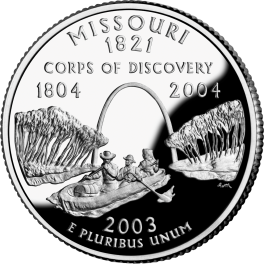 The obverse of the 2003 Missouri State Quarter shows the standard Washington Quarter design with a few alterations. The Washington Quarter, that ran from 1932-1998, had the date on the obverse, as well as the word “Liberty.” This design was changed slightly with the introduction of the State Quarters, and later the Territory Quarters and National Park Quarters. The new design still shows Washington looking left, however the obverse text now reads “United States of America – Liberty – In God We Trust – Quarter Dollar.” The reverse of this coin depicts two men in a canoe boat with trees on either side of them, and an arch ahead of them. The arch that is shown on this coin is the Gateway Arch (or the Jefferson National Expansion Memorial), which was created to commemorate the expansion of the nation westward. Lewis and Clark are the two men depicted in the canoe. They began a journey westward in 1804, and they ended in St. Louis, Missouri in 1806. On this coin, they are traveling up the Missouri River into the city. Towards the top of the coin is the phrasing “Corps of Discovery,” representing the group that these two men were a part of. The voting process for the final design of the coin went much like most of the state quarter competitions go. The Governor appointed 12 citizens to serve on the Committee for Commemorative Quarter Designs. There were over 3,300 submissions received and those were then voted on by the public. The designs were uploaded to the internet where there were 175,000 votes. This narrowed the competition down to five final designs. The final design was finally chosen. The first version of the quarter showed a similar scene to what we see now. The Gateway Arch was slightly smaller. The design didn’t gain much traction because it was not a strong design. Per usual, the Mint came back with a different design that showed a much larger Arch, a larger boat with more people, and highly modified woods. The artist, Paul Jackson, said “Entrants were told that the winning design would appear on the reverse of Missouri’s quarter. Now it appears as if the competition was nothing more than a hoax. The United States Mint never intended to use our designs.” The Mint had once again changed the design of the quarter without ever consulting with the designer. When the Mint returned the revised design, the Commission appointed by Missouri was very disappointed in the look. They stated that the design seemed to have too many conflicting storylines and that the numerous elements created clutter and mess. An outraged Jackson tried numerous times to contact the Mint to discuss his outrage. He spoke on public levels, including on NPR and morning talk-shows, but he was never grated a meeting. He visited the Mint himself and asked to speak with a Public Relations representative but his request was denied. CBS was finally able to get through to the Mint and they replied with a simple, “No comment.” After several TV appearances, the Mint finally contacted Jackson back for a meeting. The Mint made changes to the design once again after the meeting, but none of the changes fell in favor with Jackson’s requests. Many people consider this design the poorest to ever grace a state quarter. After the controversy with the Missouri quarters, Mint officials decided that they no longer wanted outside help in designing the quarters. They agreed to accept written ideas, but to not let citizens design the coins. One may think, if only the Mint had cooperated, there may be some much better designs on the market nowadays. This was the 24th coin released in the Statehood Quarters program. The reverse text of the coin reads “Missouri 1821 – Corps of Discovery 1804 2004 – 2003 – E Pluribus Unum.” All of the Statehood Quarters were clad, meaning that they were seventy-five to eighty percent copper, and the rest was composed of nickel. The core of the coins were solid copper. These coins, however, were produced in silver for special Silver Proof Sets. The coins minted in included Illinois, Alabama, Maine, Missouri, and Arkansas
Errors on the 2003 Missouri State Quarter There are currently no known errors of this coin. If you ever run across anything that looks unusual with the Missouri State Quarter, please contact one of our experts to have the error verified, or send the coin to a professional grading company for their opinion. However, the average circulation State Quarter is only worth the face value of $0.25. These coins can be spent, saved, or taken to the bank.
Varieties on the 2003 Missouri State Quarter This coin, designed by John Flanagan and Alfred Maletsky was produced in a silver variety as part of proof sets. There were a total of 1,125,755 silver coins produced for this series. They are composed of 90% silver and 10% copper. The average price of the single silver coin ranges from $5 to $10, depending on the grade. The easy indicator to determine if your coin is silver is by the mint mark. The silver quarters will have an “S” mintmark, rather than a “P” or “D.” In addition to the silver quarters, late-night TV. began selling gold plated State Quarters in an attempt to con viewers into thinking that the coin would be worth a lot more. Unfortunately, the amount of gold that it takes to plate a quarter is very insignificant, and these gold plated quarters have no value in the collector community.