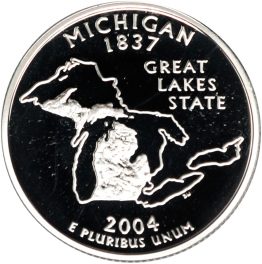 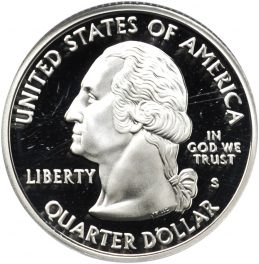 The obverse of the 2004 Michigan State Quarter shows the standard Washington Quarter design with a few alterations. The Washington Quarter, that ran from 1932-1998, had the date on the obverse, as well as the word “Liberty.” This design was changed slightly with the introduction of the State Quarters, and later the Territory Quarters and National Park Quarters. The new design still shows Washington looking left, however the obverse text now reads “United States of America – Liberty – In God We Trust – Quarter Dollar.” The reverse of this coin depicts the Great Lakes that boarder the state, and that give the motto “The Great Lakes State” to Michigan. Unfortunately, this coin lacks much of the symbolism that the other coins have, but it still shows a great design of the state surrounded by the lakes. The lakes that make up the Great Lakes are Superior, Michigan, Huron, Erie, and Ontario. The search for the coin design began in 2001. Governor John Engler gathered 25 members, some of which included local numismatists. 4,300 designs were received from residents of the state. The design ideas of the four finalist were “Michigan State Outline with Great Lakes and State Icons,” “Michigan State Outline with Great Lakes and Mackinac Bridge,” “Michigan State Outline with Mackinas Bridge and Automobile Industry Icons,” and “Michigan State Outline with Great Lakes and the Automobile Industry Icons.” One final design was added to these four that was the state outline with the Great Lakes shown. At the end of the contest, the Governor selected the winning design, with the help of a numismatist. Many people did not like the design because it seemed to be the most tacky out of all of the choices. Ken Anderson of CoinWorld wrote in disgust, “I congratulate Governor Jennifer Granholm in regards to the Michigan State quarter design. Her comment of the state outline being the most recognizable characteristic when viewed from space is not justification for portraying only the outline on our quarter. Out of the first 50 quarters the Michigan quarter is the only quarter that does not depict something of interest within the state, the people of Michigan, or any major accomplishment of its citizens. Next time we are all in space we must remember to look for the outline of Michigan.” This was the 26th coin released in the Statehood Quarters program. The reverse text of the coin reads “Michigan 1837 – Great Lakes State – 2004 – E Pluribus Unum.” All of the Statehood Quarters were clad, meaning that they were seventy-five to eighty percent copper, and the rest was composed of nickel. The core of the coins were solid copper. These coins, however, were produced in silver for special Silver Proof Sets. The coins minted in included Michigan, Florida, Texas, Iowa, and Wisconsin
Errors on the 2004 Michigan State Quarter There are currently no known errors of this coin. If you ever run across anything that looks unusual with the Michigan State Quarter, please contact one of our experts to have the error verified, or send the coin to a professional grading company for their opinion. However, the average circulation State Quarter is only worth the face value of $0.25. These coins can be spent, saved, or taken to the bank.
Varieties on the 2004 Michigan State Quarter This coin, designed by John Flanagan and Donna Weaver was produced in a silver variety as part of proof sets. There were a total of 1,769,786 silver coins produced for this series. They are composed of 90% silver and 10% copper. The average price of the single silver coin ranges from $5 to $10, depending on the grade. The easy indicator to determine if your coin is silver is by the mint mark. The silver quarters will have an “S” mintmark, rather than a “P” or “D.” In addition to the silver quarters, late-night TV. began selling gold plated State Quarters in an attempt to con viewers into thinking that the coin would be worth a lot more. Unfortunately, the amount of gold that it takes to plate a quarter is very insignificant, and these gold plated quarters have no value in the collector community.