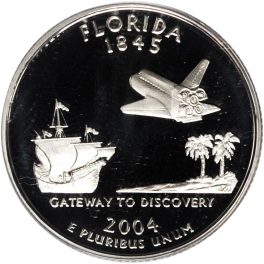 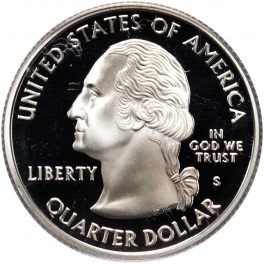 The obverse of the 2004 Florida State Quarter shows the standard Washington Quarter design with a few alterations. The Washington Quarter, that ran from 1932-1998, had the date on the obverse, as well as the word “Liberty.” This design was changed slightly with the introduction of the State Quarters, and later the Territory Quarters and National Park Quarters. The new design still shows Washington looking left, however the obverse text now reads “United States of America – Liberty – In God We Trust – Quarter Dollar.” The reverse of this coin depicts three different objects. To the left there is an old ship made out of wood. This ship represents the different ages of discovery and the explorers who founded Florida. The land of Florida was first discovered by Ponce de Leon who was looking for the Fountain of Youth. He called Florida “Pascua Florida,” which translated means “Flowery Easter.” In the center of the coin, there is a space shuttle launching from Cape Canaveral. Florida is the home to the American Space Program, NASA. To the bottom right are two sable palm trees which are representative of Florida’s landscape. To begin the coin program, Jeb Bush, Governor at the time, selected a nine-member crew to search for design ideas. Gary E. Lewis, a numismatist from Florida, was selected as the Chairman of the group. Later, Lewis went on to serve as President of the American Numismatic Association. There were over 1,500 ideas that flooded in, and the committee was required to narrow the results to just 25. Following that, they narrowed the results even further to just 10. Some of the final themes that were sent to the Governor included, “Everglades,” “Gateway to Discovery,” “Fishing Capital of the World,” “St. Augustine,” and “America’s Spaceport.” After popular vote from the citizens, the “Gateway to Discovery” ideas was chosen. Bush preferred other designs over this one, but decided to leave it be. The Mint produced the design of the quarter and to much of America’s dismay, the design seemed very disjointed. However, this is the first time that the Mint ever publicly acknowledged the original design, who in this case was Ralph Butler. He was stationed at conventions and shows after the release of the quarter to sign autographs. This was the 27th coin released in the Statehood Quarters program. The reverse text of the coin reads “Florida 1845 – Gateway to Discovery – 2004 – E Pluribus Unum.” All of the Statehood Quarters were clad, meaning that they were seventy-five to eighty percent copper, and the rest was composed of nickel. The core of the coins were solid copper. These coins, however, were produced in silver for special Silver Proof Sets. The coins minted in included Michigan, Florida, Texas, Iowa, and Wisconsin
Errors on the 2004 Florida State Quarter There are currently no known errors of this coin. If you ever run across anything that looks unusual with the Florida State Quarter, please contact one of our experts to have the error verified, or send the coin to a professional grading company for their opinion. However, the average circulation State Quarter is only worth the face value of $0.25. These coins can be spent, saved, or taken to the bank.
Varieties on the 2004 Florida State Quarter This coin, designed by John Flanagan and James Ferrell was produced in a silver variety as part of proof sets. There were a total of 1,769,786 silver coins produced for this series. They are composed of 90% silver and 10% copper. The average price of the single silver coin ranges from $5 to $10, depending on the grade. The easy indicator to determine if your coin is silver is by the mint mark. The silver quarters will have an “S” mintmark, rather than a “P” or “D.” In addition to the silver quarters, late-night TV. began selling gold plated State Quarters in an attempt to con viewers into thinking that the coin would be worth a lot more. Unfortunately, the amount of gold that it takes to plate a quarter is very insignificant, and these gold plated quarters have no value in the collector community.